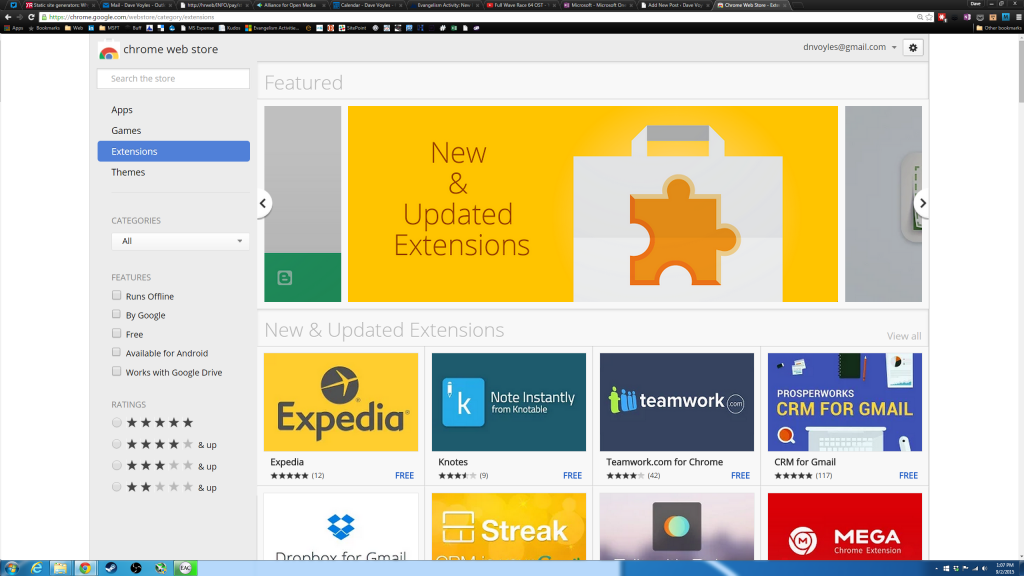 Update: Lots of discussion going on about this on Reddit

In my day-to-day browsing, I use Chrome Canary. I want to see the latest and greatest. It will occasionally have display / graphical issues, so I’ll have to revert to standard Chrome, but after a few weeks the issues seem to be resolved. My main development machine is a late-2013 MBP. I’m on the road (AKA flying) constantly, and I need a strong laptop with discreet graphics, and also allows me to work on every mobile platform, so this does the trick.

On my Win 10 machine, I use Edge. It’s light weight and incredibly fast, but still missing too many features for me to make it my day-to-day browser as a web developer, but for browsing content I haven’t run into many issues. . I tried installing Win 10 on this MBP, but the SSD was failing. Oddly enough, Windows 8 and 10 both detected it, but OS X didn’t. It wasn’t until I brought it into the Apple store and they ran their in-store diagnostics that it was picked up. Even the diagnostics tool built into OS X couldn’t detect it. Odd.

Considering most of my day is spent in the browser, I need extensions to help me get the most of my work. For that, I use a number of extensions. Bear in mind, extensions can not only pose a security hazard, but also occasionally offer a ton of overhead, both in terms of CPU but especially RAM, as they all run as each tab in Chrome runs as its own process, and brings a separate instance of each extension. That means if I have 10 tabs open, and 10 extensions, then I can have some serious overhead!

Nonetheless, here are several which I’ve found to be extremely useful:

When I create a new blank tab, Start will fill it with useful information, such as RSS, Facebook messages, Gmail, how far local Uber drivers are, weather, etc., 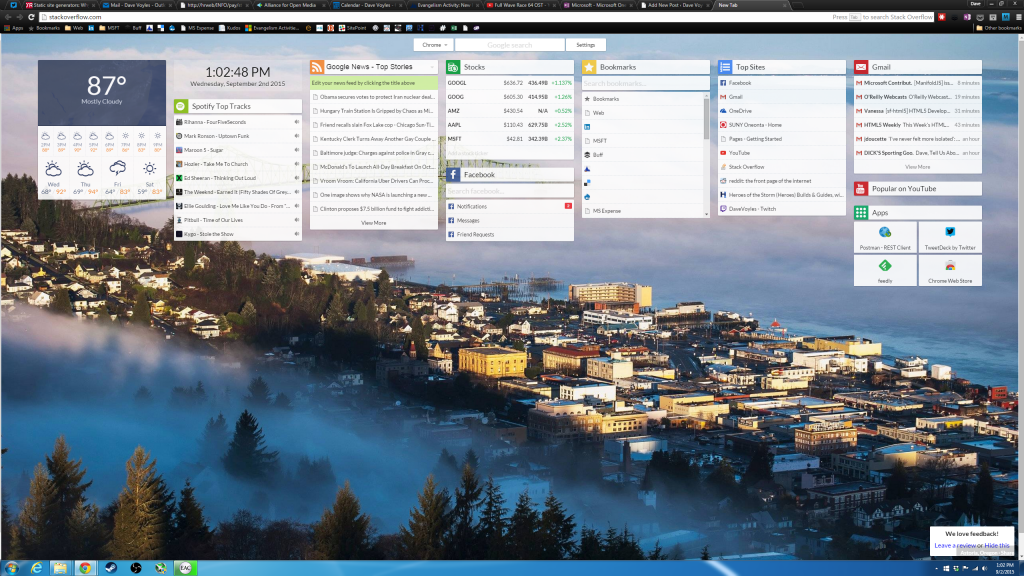 I pay $10 / mo for the Buffer service, which allows me to ‘buffer’ or create a pool of tweets which I can set out at predetermined times. This is fantastic for spreading the word about things that pique my interest, but also information which I think would be useful to my audience. Each morning, I’ll hop onto Feedly or buffer and find 20 stores or so and buffer them for the day. This way, I can continue to program, but also spread the good word about things I found interesting. Even better, if I put a lot of work into a blog post or particular project, I’ll frequently buffer it 4x each day, so that individuals who were not on Twitter when I first sent out a notification about the post can find it later.

This adds a multi-line JavaScript console to chrome dev tools, similar to what appears in Firefox’s dev tools. May not sound like much, but it makes diving into your JavaScript code that much easier.

I spend a lot of time staring at a screen, either programming for work, or playing games for leisure. Heroes of the Storm is my new jam. Because of this, my eyes grow sensitive to the bright lights throughout the day, so I tend to use dark settings for my IDEs and browsers. This extension makes Chrome’s Dev Tools dark, to match the browser theme that I have. 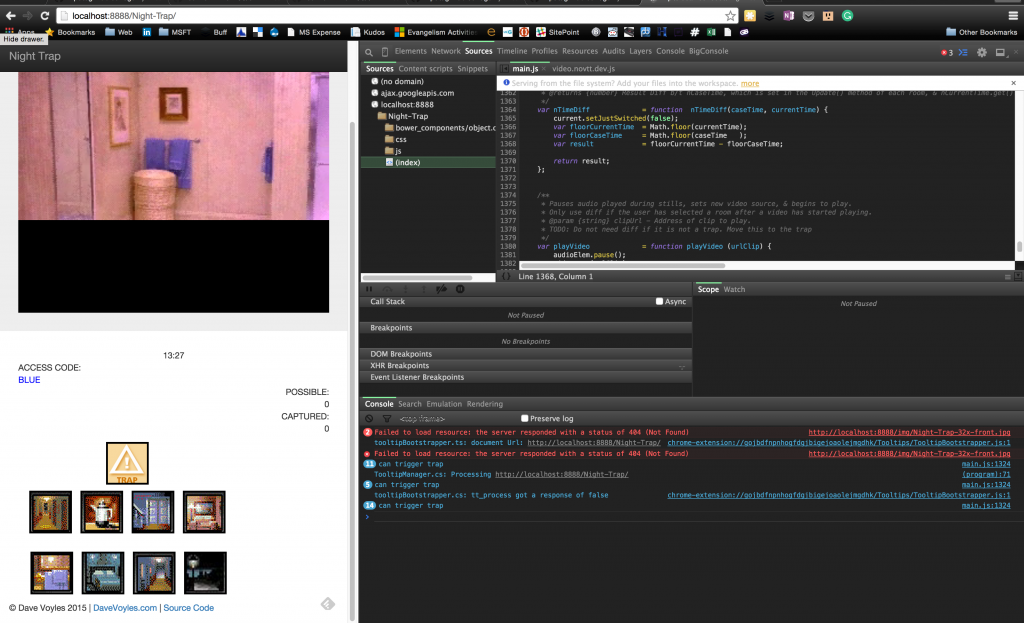 A built-in mobile emulator which spoofs the UA string to that of the mobile device you select. Again, useful for debugging, in addition to testing out several other scenarios, such as triggering events, simulating different connection speeds, as well as spoofing GPS coordinates. A must for all mobile developers.

If you do any work with WebGL, then this is a must have. Makes much easier to dive deep into the code. And who says JavaScript isn’t a powerful language?

Remember how I talked about Chrome being a resource hog above? Well with this extension, you can put tabs ‘to sleep’ after a set period of time, thereby disallowing them from drawing from your RAM. Very useful. Even better, you can whitelist sites, so that it does not put those to sleep!

This is the best thing for reading RSS since Google Reader (RIP). I frequently export my feeds, so if you are interested in downloading the .xml file to see which blogs I follow, you can download them here as a .xml file.. Lots of old video games and programming ensue. 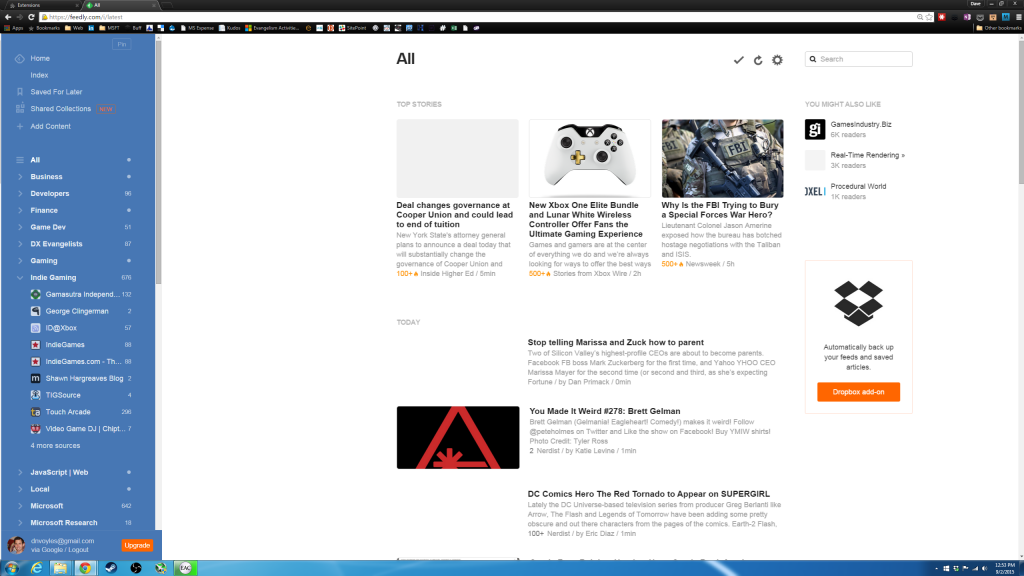 Scrolling on Chrome in Windows sucks. The trackpad on OS X makes for such a smooth experience. With SmoothScroll, you can emulate this across the windows version of Chrome and apply a variety of settings to get a much finer experience. My only complaint is that this does not automatically get disabled when I use Chrome on OS X, therefore I have SmoothScroll settings used, in addition to those set my default within OS X. I wish there was way for Chrome to detect which OS you are running and thereby enable / disable selected plugins.

I read tons of articles each week, and also send out a weekly newsletter. The best way that I’ve found to stay organized is to add them to Pocket, then create a tag, which allows me to easily organize and categorize them. You can create a free Pocket account and you’re good to go. Extremely useful for having to reference things months later, when you’re thinking ‘Oh geez, what was the name of that article?’ 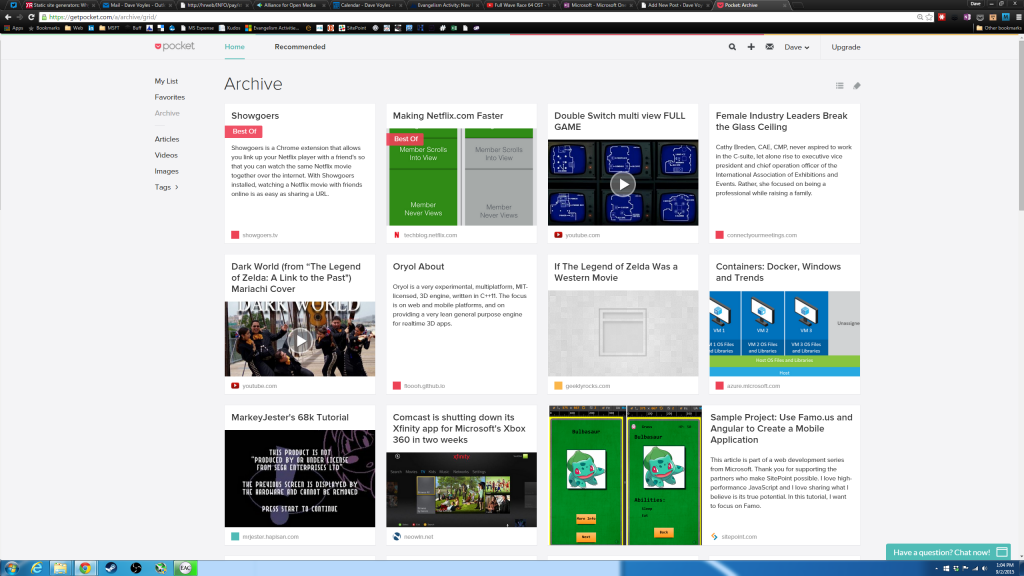 This adds a ton of features to Reddit, including the ability to make the site darker (easier on the eyes). I occasionally post in Reddit, so I’ve found this makes the experience far greater than just browsing the vanilla site.

If you’ve got any recommendations, feel free to send them my way!

8 thoughts on “A list of Chrome extensions that I use, and why”