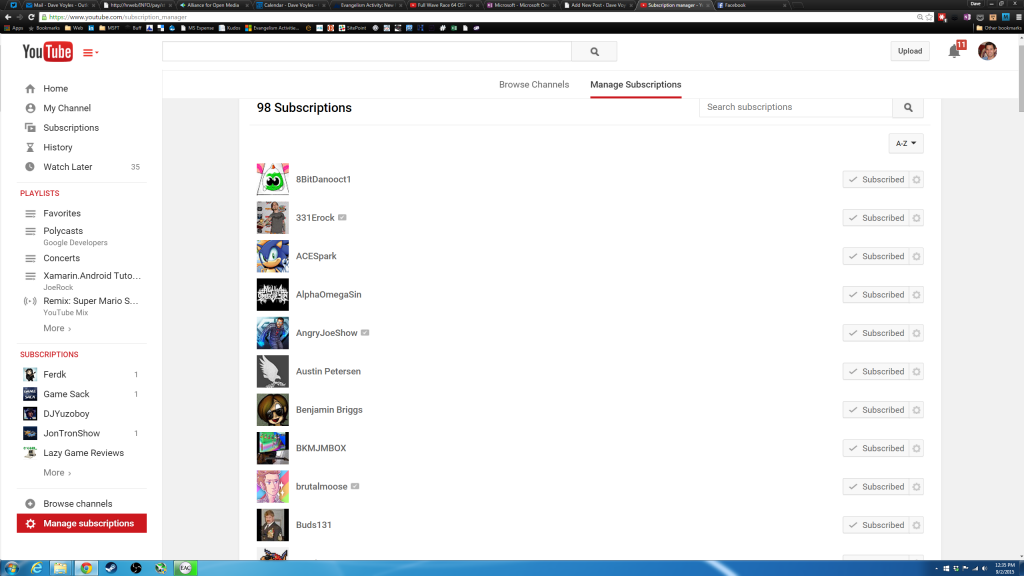 I spent a lot of time watching YouTube. Actually, most of the time I’m just listening while it plays in the background, because so much of what I focus on is video game music. Here are just a few of the channels I subscribe to, and I plan on creating an additional list in the future.

Some of my favorites (alphabetical order)

331Erock – I’ve not seen a guitar player with so much enthusiasm and joy while recreating heavy metal versions of not only video game tracks, but also music classics such as Phantom of the Opera and some Beethoven compositions.

AngryJoeShow– As implied, Joe and his cast of friends are often pretty angry in their reviews. Regardless, they are generally professionally done, long form (often 30+ minutes) and he frequently plays with his audience.

brutalmoose – This guy’s video reviews are hilarious. He plays games that are pretty hard to find, or just haven’t been covered by others before, such as Amazon Trail and Lego Island on the PC.

Dale North – Dale is a writer at Destructoid, but also an incredibly talented musician, both vocally and on the piano. Take a look at his cover work from the Lunar and Persona franchises to see what I mean. He also does some original work.

Game Sack– Joe and Dave are denizens of Colorado who build some very professional video reviews every two weeks, each focused on a specific theme. They have a massive collection of consoles and frequently have users loan them games as well, which allows them to go in depth with both well known and obscure consoles alike. Each episode is roughly 30 minutes long, and very well edited.

Handmade Hero Ever want to learn how to make PC games from scratch? Well this is the place to learn. The developer streams for roughly 1 hour each evening, then saves 30 minutes afterwards for Q&A. You can only learn so much from a book, and I’ve found that Casey’s technical knowledge and desire to share in an interesting manner really makes this a channel worth watching. Even if you haven’t programmed a game before, this is a great place to get many of your technical questions answered.

My Life in Gaming– I met Courey, one half of this team, at a Polygon meetup at Barcade in NYC several years ago, and he’s impressed me with his work since then. While he professionally edits film during the day, his real passion lies in creating these videos with his colleague Try4ce. The team has their own distinct style, such as their VHS inspired strategy guides, in addition to their in-depth coverage on how to get the best visuals out of your consoles using various hardware tools and upscalers.

Lazy Game Reviews – If you enjoyed DOS or older PC games a child, then this is the channel for you. Not only is the author extremely knowledgeable about the games of yesteryear, he is also very technical and has a bevvy of the original hardware to go along with it. Check out his “LGR Thrifts” series to see him scope out a bunch of thrift stores in his area and find some classic gems.

Plasma3Music Remixes – Video game music is a huge passion of mine, and this channel remixes some of my favorite tracks in a way I haven’t heard before. Often with a jazzy, upbeat vibe, but occasionally with a rock theme. Check out the Little Nemo playlist for some fantastic tracks from one of my favorite NES games.

Chris Lewis – Algorithms in game development. Math is not my thing, so this is a great place to learn it.

In a follow up post, I’ll list some of the others. I just didn’t want to overwhelm you with all of them now. If you have any recommendations, fire away!