This is the second book of Robert Kiyosaki’s which I’ve read, the first being Rich Dad, Poor Dad, which I’d highly recommend. Second Chance covers a variety of topics, including personal finance, investing, and economics. The basis of Kiyosaki’s chapters come from his fascination with the late R. Buckminister Fuller and his words of wisdom throughout his life.

I found the first half of the book to be filled with more useful information than the second, largely because the author reiterates his points again towards the end. Regardless, I found myself leaving more than 40 tags on pages, so that I could reference their importance later on. 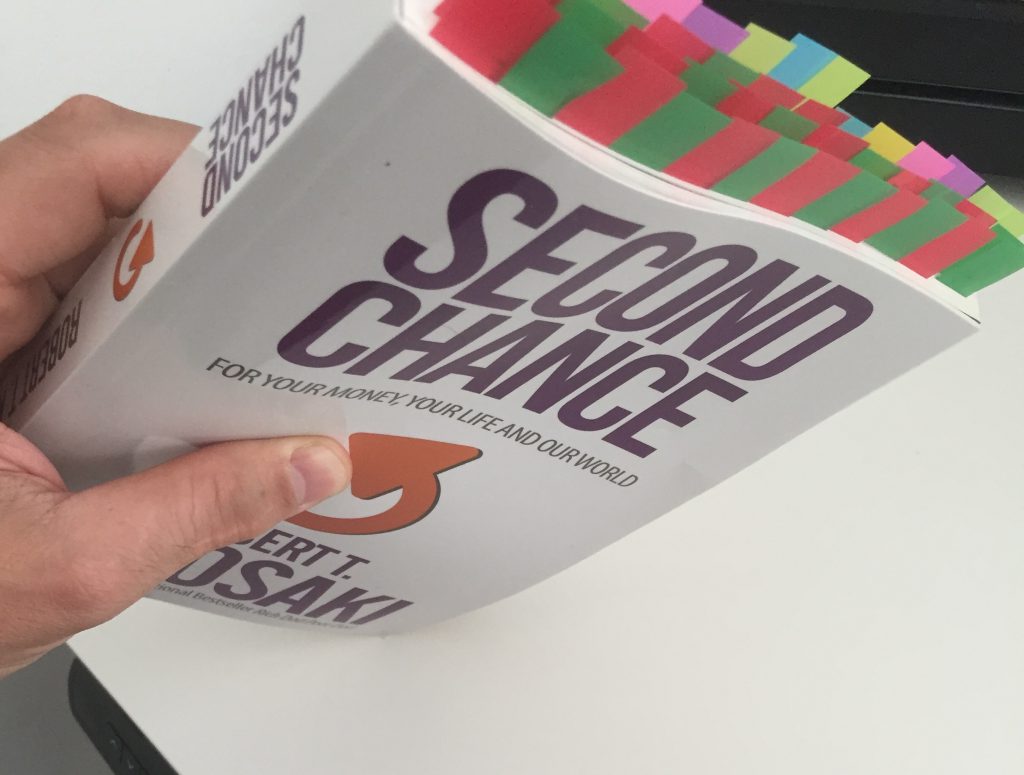 Overall, I found it to be a great read, largely because the author had many charts and graphs to further illustrate his points throughout the book. Moreover, I feel better prepared to discuss not only personal finance, but also economics in front of an audience after reading this.

What follows below are snippets of information which I found to be useful and hopefully are equally as useful for you:

Knowledge is the new money.

Courage comes from the French word, “le coeur”, the heart.

Today we live in the Information Age – and information is abundant and often free. Before the Civil War in America, it was against thee law in many states to teach slaves to read and write. Knowledge is the most powerful force on early. Information x Education = Knowledge.

Wealth is stolen via our money:

The value of your labor is stolen via taxes

Prices rise when governments print money. As prices rise, people work harder, only to pay more in taxes and inflation.

Inflation is good for debtors and bad for savers, which is why savers are losers.

The fractional reserve system is used by banks. A saver puts $1 in the bank under their savings account. The bank is allowed to lend $10, against the $1 to borrowers. This is another form of “printing money” which is not only inflationary, but also reduces the purchasing power of the saver’s money. This is often why you hear “savers are losers.” Make your money work for you.

If the government is promising to save you, you’ve probably already lost. (In terms of social security, healthcare, and new spending agreements)

When money is printed — by banks or governments — two things happen: inflation kicks in and taxes go up.

There are two types of rich: One type is people with high-paying jobs, such as corporate executives, professionals, and celebrities. They are high income rich. The other type of rich is the person who deos not need a job — most of these people are asset rich.

In the world of retirement funds, there are two basic types:

The new generation is in college and trade school, and they cannot find jobs, or jobs that utilize their level of education.Many of these young people are boomerang kids, kids who leave home, only to return to live with mom and dad. This makes many moms and dads, the sandwich generation, people whoa re now caring for their kids and their parents.

The Great Depression and financial crisis

America is attempting to print its way out of the financial crisis.

In 1971 President Nixon took the dollar off the gold standard. The poor lost because the money they worked for became worth less and less. When they earned more money, they paid higher taxes.

As the money they work for loses value, prices keep going up. The harder the poor work, the further they fall behind.
Unfortunately, even if the minimum wage is increased, the poor will continue to be poor because they work for money that is no longer money.

Mind Mapping, as a method of learning

Mind Mapping uses color and sketches, rather than words to organize and prioritize thoughts. Using very few words forces the participant to put words and thoughts into pictures, which intensifies the learning and discussion process.

John Taylor Gotto – Dumbing Us Down

In 1903 John D. Rockefeller created the General Education Board. Around the same time another of the Robber barons, Andrew Carnegie, promoted his foundation for the Advancement of Teaching, to influence the American education agenda, directing what children were taught in school.

The concept of the U.S. Federal Reserve Bank was created in secrecy on Jekyll Island, Georgia.

(NPR also had a fantastic episode of Planet Money on the subject).

A coin has three sides: Heads, talks, and the edge. Intelligent people stay on the edge and look at both sides.