Why do any of this?

Before I started working in tech, I was a construction worker in Manhattan. One of the final projects I worked on was a renovation of a beat-up looking commercial space in Williamsburg Brooklyn, which we were now turning into an art studio for a well-known graffiti artist. Several million dollars were going into it, and I was managing it, in my mid-twenties.

The problem was that I was taking it over from someone who was terribly disorganized, and the project was in disarray. I had to remember the names of one dozen contractors, plus all of their employees, and read the blueprints to understand what would be happening to every inch of this space. I needed a system to help me out.

The best advice I ever received, nonetheless while working on that project, was to keep a list.

The first day was the hardest. I had to write down everything that I saw wrong, and over time begin to correct the mistakes. In the morning, I would create a “todo” list with the items that needed to get addressed. Little by little, my stressed would subside, and the miraculously, the project would get completed.

Best of all, I discovered something that I could take with me in the future. If it got me out of that mess, it could get me out another. An additional benefit was that I could share it with other people on the project so that they understood what my current priorities are.

If it’s not written down, it’s not getting done.

This is my master list of what needs to get done today. Generally, my day is not done until all of these items are addressed. Notice how I didn’t say completed. Those are two different things.

Addressed means that I am going to take some sort of action on the item. This may be as simple as sending an e-mail. If I receive a response, which has some sort of follow up action, I’ll then add that as a bullet point to the original item.

Now when I return to work the next day, I can reference this point, and know exactly where I left off.
Completed means that the item is finished, and requires no follow-up action. Some people like to strikethrough those items, but I prefer just to remove them all together, to avoid clutter.

Writing things down also allows you to not dwell on them. This not only relieves mental stress, but also frees up your mind to focus on other activities. 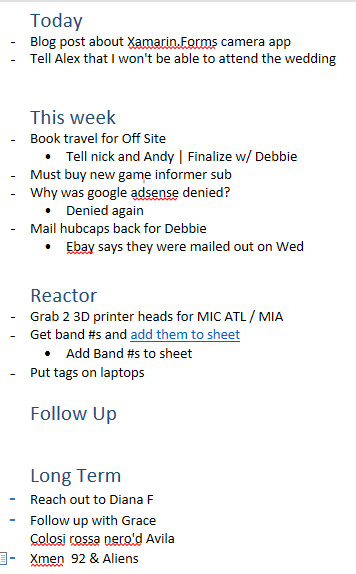 These may not be things that I have to do today, but perhaps have to boil in the back of my head for a bit while I need to wait for something else to happen, or I’m just waiting for the write time to approach someone.

Occasionally, I may even move something between Today, This Week, and Long Term.

I carry a notebook everywhere. You know, one of those small, moleskin notebooks. I jot down notes constantly, largely so that I don’t forget, but also to show that I’m paying attention. 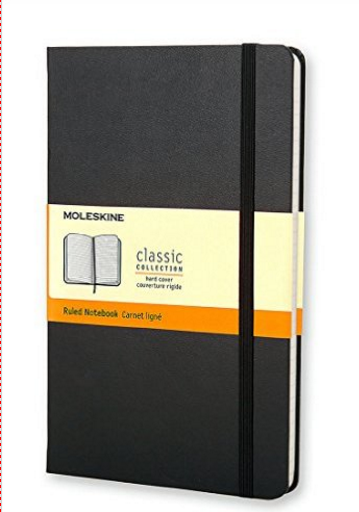 If for whatever reason I don’t have that notebook with me, I’ve always got my phone, which has OneNote, a free digital notebook from Microsoft. This is my holy book. I keep everything in there. I have different notebooks for different subjects, which I can share with the various vertical teams that I’m on.

Even better, you can write content down in your moleskin book, use a tool like office scanner on your phone, which takes a photo of the text, and sends it to OneNote. Here’s the kicker: OneNote can parse the image for text, and actually write it into OneNote for you, so that it is now searchable.

Never underestimate the value of being able to have an answer at your fingertips.

My immediate memory is terrible, and I’m frequently overwhelmed with how much I have going on at any moment, so I jot it down. Later, when I need to recall a name, number, or place that I’ve been, I can open OneNote, type into the search box, and anytime I’ve used that word, it will appear in the index, immediately.

Have any additional notetaking tips that I should be aware of? Reach out to me on Twitter (@DaveVoyles) and I’d be glad to learn some more.