Link to the docs from Chuck Walbourn

Where is the DirectX SDK?

Starting with Windows 8, the DirectX SDK is included as part of the Windows SDK.

We originally created the DirectX SDK as a high-performance platform for game development on top of Windows. As DirectX technologies matured, they became relevant to a broader range of applications. Today, the availability of Direct3D hardware in computers drives even traditional desktop applications to use graphics hardware acceleration.

In parallel, DirectX technologies are more integrated with Windows. DirectX is now a fundamental part of Windows.

There are really only three scenarios where you should continue to use the old DirectX SDK:

Link to the book 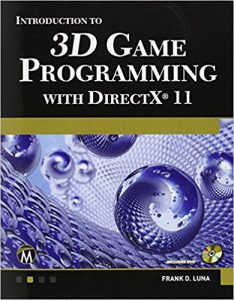 This book is a monster. I read 1/3 of it on a flight from Philadelphia to Seattle, and found it to be incredibly useful for learning DirectX. The author is very thorough, and has notes along the way illustrating why he explains things a certain way, or how edge cases may sprout up from time to time around the way a certain feature of DirectX is working. Overall, it is well worth the money, and I’ve already received huge value from it.

Link to the site 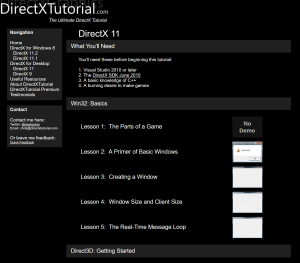 I started here with learning DirectX, and still believe it is the best place to start. The author is a Microsoft MVP, and I can see why. His tutorials are incredibly thorough, practical, and segues seamlessly from one chapter to the next. You can get pretty far into the tutorials before you hit a premium tier, which is unlocked by paying $50, which I still think is a steal at that price.

What is the graphics pipeline? (featuring DirectX 11) [VIDEO]

Link to the video 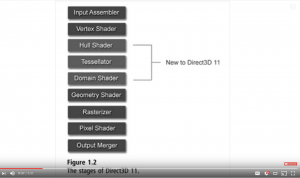 In this video you’ll learn what a graphics pipeline is, what they are used for and also what happens at each stage of the pipeline. The DirectX 11 pipeline is used as an example.

Link to the GitHub repo

In addition to the samples, we are announcing the first DirectX 12 preview release of the MiniEngine.

It came from a desire to quickly dive into graphics and performance experiments. We knew we would need some basic building blocks whenever starting a new 3D app, and we had already written these things at countless previous gigs. We got tired of reinventing the wheel, so we established our own core library of helper classes and platform abstractions. We wanted to be able to create a new app by writing just the Init(), Update(), and Render() functions and leveraging as much reusable code as possible. Today our core library has been redesigned for DirectX 12 and aims to serve as an example of efficient API usage. It is obviously not exhaustive of what a game engine needs, but it can serve as the cornerstone of something new. You can also borrow whatever useful code you find.

Some features of MiniEngine

Link to the Extension

Link to the GitHub repo

These components are designed to work without requiring any content from the DirectX SDK. For details,
see “Where is the DirectX SDK?” <http://msdn.microsoft.com/en-us/library/ee663275.aspx>.